NFT gaming is on the rise and as it gradually edges towards more mainstream audiences, developers and providers are flocking to the platform. Though it is still in its initial stages, the genre has already produced a variety of popular games. These titles have weaved a successful structure, combining a gorgeous presentation with immersive gameplay and innovative blockchain technology. All kinds of genres are now popping onto the scene. From card games to fantasy football, to sandboxes and fighting games, the NFT game space is populating will a variety of titles to choose from. But what new NFT games are currently trending?

We’ll be having a look at some of the latest innovations in NFT gaming. These games have found new and exciting ways to combine familiar gameplay loops with ground-breaking blockchain elements. There seems to be no end to the creativity that developers churn out to produce new experiences. These titles confirm just how versatile NFT technology in gaming can be. Some of these titles are altogether new gaming genres that have never been seen in NFT gaming. We’ll even give you a sneak peek at one of the most exciting new NFT games coming out in 2022. If you’re new to NFT gaming or are simply looking for the next title to dive into, this list might just have what you’re looking for. So, without further ado, here is our list of new NFT games that you can be playing right now!

Thoroughbred horse racing is an incredibly popular sport. For some it is simply a way to place wagers on the races themselves, for others it’s a way of life. Many developers have tried to translate tis beloved tradition into the digital space with very limited success. So far, there hasn’t been anything that matches the intensity and depth of the sport. But a bit of NFT technology can go a long way when use in the right way.

Silks is a play-to-earn NFT game that links the real world of thoroughbred horse racing with the metaverse. In the game, players can own NFT digital horses that are directly linked to horses in the real world. The digital silk version of the horse has the same bloodlines, race records and development history as its real-life counterpart. With all this information being meticulously stored in enormous datasets. These digital horses exist as NFTs on a blockchain, with values that can fluctuate accordingly. The entire concept may sound incredibly strange, but it doesn’t steer too far away from what we already have with fantasy football. Similarly, when a real thoroughbred horse wins, the owner of their respective digital horse is also rewarded. These rewards come through in the form of Silk Transaction Tokens or $STTs.

Additionally, players can also breed their own digital horses further to earn more money. Races can also be staked, giving you even more options to play and make some cash in the process. The game’s avatar system allows for players to communicate with each other, creating in-game communities that can bring players together. It is possibly one of the most inventive new NFT games with a play to earn model in 2022.

Picking up the trail from the incredibly popular Axie Infinity is Binamon. The monster collecting game has even fashioned its name in the likes of its inspirations. The promise is to deliver an experience that is deeper and more layered than what Axie Infinity currently provides. The concept remains quite similar though. The player must collect mons, which are alien hybrids that have spread throughout earth. Drawn in a different style, these monsters must be collected and then used in a variety of PVP and PVE events. There is also an Explore mode made available, giving players the chance to trace the game’s infinite terrain, earning Ambrosia in the process.

Ambrosia is one of the game’s two in-game tokens. Although Ambrosia is not yet traded, it is still used to make in-game purchases and trades. BIN is the other token, which has already started trading, albeit in limited ways. The game runs on the Binance Smart Chain, a very popular P2E token and NFT tool. This makes your NFT mons quite easy to keep track of, as you build your arsenal of unique creatures.

Binamon promises to be a complete gaming experience with loads of different experiences for players to enjoy. Though its current PVP feature is still quite limited, the developer hopes to change this soon. An arena mode, schedule tournaments, guild wars and even battlefield brawls have been promised and we can hope to see these new updates rolling out in the near future. 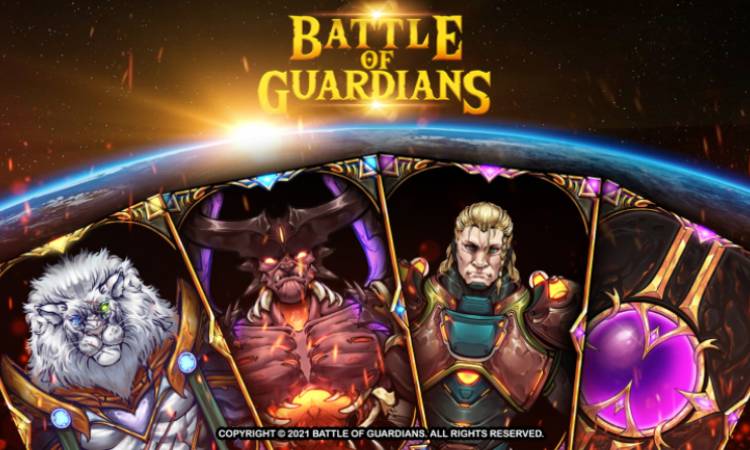 Perhaps one of the most exciting things about new crypto NFT games is seeing how developers adapt popular gaming genres onto the platform. We’ve seen incredible success stories with the like of Sorare, Axie Infinity and Gods Unchained. These games have all targeted specific niches and transformed them to fit perfectly with blockchain technology. Not only have they successfully built the technology in, but they also managed to tun it into a rewarding play-to-earn model. Street Fighter, Mortal Kombat and Tekken were all game changers when they showed up on the fighting game scene and Battle of Guardians finally pushes the genre into the NFT game scene.

This real time fighting game is based on the Solano network, offering players a chance to brawl in a play-to-earn structure. Fighting NPCs and other players will reward you in in-game currency across both of the game’s tokens. These are Fighting Points and Battle of Guardians Shares. They can be used for governance as well as buying NFT characters and entering in-game tournaments. Although we have seen a few very well presented NFT games out there, Battle of Guardians takes things a step further. Developed using Unreal Engine, the game looks absolutely stunning, holding its ground against some of the most well-crafted AAA video games.

It is currently only available on PC, although the team plans to release mobile versions on both Android and iOS. Cross platform play will be available across all platforms, so you can join in the fight no matter what device you prefer.

Merging RPG hero collecting with tower defence strategy, Idle Cyber has drawn the attention of many NFT gaming fans. There are 64 characters available, and each iteration is preserved as an NFT on the Binance Smart Chain platform. Characters can be customised accordingly, with NFT assets that can also be bought and sold on the marketplace. Gameplay has players defending their zones from the enemy’s onslaught. This is done by deploying walls and a myriad of defensive manoeuvres that can effectively stall your opponent. Gameplay itself is split into three categories.

Players can engage in Missions. These daily, weekly, and monthly challenges offer players various ways to play and win. Their objectives will change accordingly, giving you a reason to come back every time. Next up is PVE, which pits players against NPC opponents in the game’s post-apocalyptic setting. On the other hand, PVP brings a more interesting twist to the table, with real players vying for the top spot. Both game modes will earn you valuable resources that can be spent in the game market and eventually withdrawn for a profit. This follows the game’s play-to-earn model which allows you to earn some cash while playing. Idle Cyber is also free-to-play, giving players a head start and an even better chance to profit from playing.

Taking the action straight up to the stars, MetaWars is a roleplaying multiplayer strategy game. This new game with NFT technology is set within the vast MetaWars galaxy. Players get to take part in three distinct gameplay modes: Exploration, Fleet Formation and Combat. MetaWars encourages cooperation, with players banding together to explore galaxies and build their armies. Through a series of missions, players earn in-game currency called $WAR. These tokens are awarded for completing challenges ad be used to place further stakes or purchase more game items. Player’s armies can be customised with a host of NFT robots and upgradable options which can be earned in-game or bought on the auction marketplace. The tokens can also be used in governance options, giving players an even bigger say within the metaverse.

Its still early days for MetaWars and while the current emphasis relies mainly on PVE aspects, the team is working hard to add more features. According to the game’s official roadmap, by mid-2022 the game will have added features that bring more PVP options to the table. More elements and properties are also to be added to the warriors, with a new PVE platform and NFT marketplace. These additions ought to enhance the game’s play-to-earn model, adding mor ways to play and obtain rewards. With a wide range of ships, weapons, classes, devices, and equipment to unlock, players can easily lose themselves in the wonderful galaxies of MetaWars. 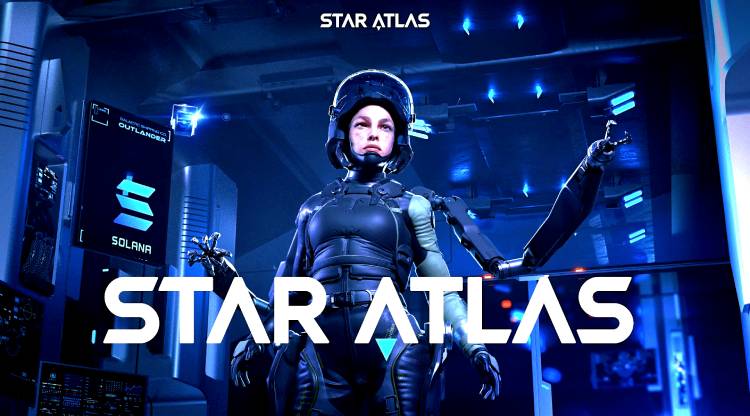 Star Atlas has been the talk of the town for quite some time now. Regarded as the most highly anticipated upcoming NFT game, the theme, strategy, and technology involved here are quite impressive. Players can explore a vast world with interconnected galaxies as the mine assets, refine them and trade them on the blockchain market. After picking their respective faction, players will engage in this battle for the world’s resources, clashing with enemy factions that would undermine their efforts. Exploration is at the heart of the game, allowing players to live out their space navigation fantasy with a touch of hyper realism. Of course, PVP will also forma big chunk of the game’s activities, allowing players to battle it out in the skies.

The game’s stunning features are built using the highly anticipated Unreal Engine 5, delivering incredible graphics for both the alien worlds and their inhabitants. The team has showcased a pre-alpha gameplay rendition of the game and it looks absolutely brilliant. Of course, we will need to wait until release to confirm the actual look of the game, but so far everything it looks fantastic.

Star Atlas biggest promise is to create a very detailed play to earn mode, one where players can assume in-game roles and jobs that will help them to earn money. You could become a scientist, aviator, cabin crew, engineers, commanders, entrepreneurs and more within this vast metaverse. These professions will help players cultivate the game’s two currencies: ATLAS and POLIS. The currency can then be used for governance, transactions and in-game missions.

Its easy to see why players are so excited about this release. Development started in 2020 and the game is expected to release in 2022, with a plethora of updates to follow.

A Whole Lot of New NFT Games to Look Forward to.

NFT games sure have come a long way since the platform’s inception, with increasingly ambitious projects on the horizon. As the genre gains more popularity, developers are imagining bigger and better ways to adopt this technology. What started off as a very niche set of games is now evolving into a popular phenomenon, drawing in all kinds of players onto the platform.

Games like Star Atlas and MetaWars are perfect examples of how big these concepts can get. Spanning across multiple galaxies, these games give players specific roes that they can then tailor to a more productive play-to-earn model. Since the start of the metaverse concept, people have been imaging all sorts of ways how this would change the world forever and with experiences like these, we can see how they will soon become a reality.

Having run though the newest NFT titles, as well as the new NFT games coming out, we hope that you have a clearer picture of what the latest titles available are. These are some of the best, new NFT games 2022 has to offer, and we look forward to seeing what else the future has in store.